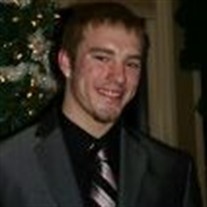 David was currently a student at Robert Morris University studying business administration. He was also a member of the Robert Morris hockey team and worked part time at Casey's General Store in Varna. Davey loved the outdoors but his main passion was playing hockey from the time he could walk. He has played on several teams throughout Illinois and Wisconsin. He dreamed of moving to Wisconsin to coach youth players in hockey.

Cremation rites have been accorded and a memorial visitation will be held on Saturday September 6 from 1-3 pm at Lenz Memorial Home in Lacon. Memorials can be made to Go Fund Me on facebook under Robert Skinner in David's name. There will be a fundraiser later on where details will be provided accordingly. Online condolences can be left at lenzmemorialhome.com.


To send flowers to the family or plant a tree in memory of David A. Skinner, please visit our floral store.

Please click here to view the video tribute
To send flowers to the family in memory of David Skinner, please visit our flower store.