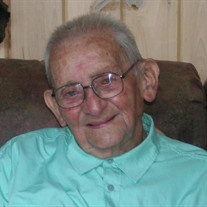 Emil Franz "Frank" Cramer, 93, of Lacon, died on June 1, 2019 at his residence. Born on May 15, 1926 in Greenview IL to the late Emil F and Bertha Diers Cramer, he served his country in the Navy during World War II as an air crewman and aviation cadet. He came home, graduated from the University of Illinois and married Donna Taylor on April 23, 1950 in Lacon. Frank and Donna enjoyed many travels with family and good friends. Family functions were always a priority for them, especially summer vacations in Minnesota. After 66 wonderful years together, Donna passed on December 20, 2016. Frank spent 8 years at Peoria IDOT- then 30 years as Marshall County Highway engineer. He was also a registered Professional Engineer, a registered land surveyor, and for a short time, a registered real estate broker. Frank was also a member of the Lacon American Legion Post 593 and a 32nd degree Mason.
Frank is survived by: his daughter Connie (Dennis) Anderson of Princeton; granddaughters Kristin (Steven) Peterson of Monticello GA, Meredith (Jamie) Hattan of Lacon, & Melissa Anderson of Princeton; great grandchildren Kyndal, Kourtlyn, Kaylor & Kendryck; neices Betty Cooper of Pekin, Linda Cramer of Athens, IL, & Carol Farquhar of Tinley Park; nephews Jack Biggs of Houston TX, Doug, Robert, & Gary Biggs all of Springfield IL, Kenneth Biggs of Port Charlotte FL, He was also preceded in death by brothers John I.D., Frank J., & Herman F.; sister Clara Biggs; stillborn sisters Bertha & Della; and nephews Donald & Larry Cramer.
Cremation rights have been accorded and a memorial service will be held at 11 AM on Saturday at Lenz Memorial Home in Lacon with Tom Nofsinger officiating. Visitation will be Friday from 5 to 7pm and one hour prior to service at Lenz. Interment with military rites of the cremains of Donna and Frank will be at a later date. Memorials can be made to Special Olympics Region A or St. Jude. Online condolences can be left at lenzmemorialhome.com


To send flowers to the family or plant a tree in memory of Emil "Frank" Cramer, please visit our floral store.

Please click here to view the video tribute
To send flowers to the family in memory of Emil Cramer, please visit our flower store.