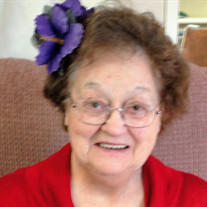 Inez L. Moseley, 86, of Eureka, formerly Varna, died on October 1, 2016 at Apostolic Christian Home of Eureka. Born in Magnolia on March 27, 1930 to the late William and Eva Hubbell Farling, she married Kenneth Kennedy on December 31, 1945. Mr. Kennedy passed away on July 3, 1969. She later married Kenneth Moseley on September 23, 1988. Mr. Moseley passed away on October 17, 1996.
Inez was a retired minister of Open Bible Church in Lacon and Delavan, IL. She also ran the Midway Cafe in Varna for over ten years.
Surviving Inez is: son William Kennedy of Talladega, AL; daughters, Linda Finnegan of Cape Coral, FL; Kathryn (Alan) Rahn of Metropolis, Sally (Dave) Junker and Joyce (Steve) Lundquist both of Varna; nine grandchildren; and ten great grandchildren. She was also preceded in death by son Kenneth, two brothers, 3 grandchildren, and a son-in-law.
Services will be held on Tuesday October 4 at 3pm at Lenz Memorial Home in Lacon with a visitation time one hour prior. Burial will be in Salem Lutheran Cemetery #2 in rural Varna. In lieu of flowers the family would appreciate donations to The Apostolic Christian Home of Eureka for Heiterland. Online condolences can be left at lenzmemorialhome.com


To send flowers to the family or plant a tree in memory of Inez Moseley, please visit our floral store.

To send flowers to the family in memory of Inez Moseley, please visit our flower store.