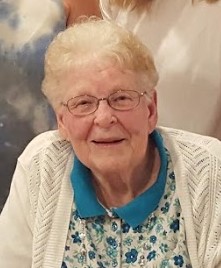 Irma M. Watkins, 98, of Sparland, IL passed peacefully on August 29, 2021at Lacon Rehab and Nursing in Lacon, IL.  She was born June 5, 1923 in Toluca, IL to the late Herman and Minnie Tarmann Krull.  She married John W. (Wes) Watkins on April 17, 1945.  He preceded her in death on October 29, 2007.  She was also preceded her brother Herman Krull Jr., her sisters Jeanne Tenhaeff, Joanne Swanson, Marjorie Knoth, and her sons Bill and Mike.

Wes and Irma lived and farmed in rural Sparland for many years.  Irma worked at Hobbs Corporation in Spring Valley, IL and at Lacon Seal in Lacon, IL.  She was also active in her children’s activities – Cub Scouts, 4-H Club, school band & chorus, sports.  She loved celebrating Christmas with the family gathered together, and she loved gift-giving.  After retirement, Irma and Wes enjoyed traveling and spent many winters in Texas.  One of her biggest joys was spending time and making memories with grandchildren and great grandchildren.  She was also an active member of her community and cherished many friendships.

Irma loved and cherished her family and her community.  She was a devout Catholic and was a faithful member of Immaculate Conception Church in Lacon, IL.

Visitation for Irma will be held September 8 from 9-10am at Lenz Memorial Home in Lacon with a mass held at 10:30 at the Immaculate Conception Church in Lacon. Memorials can be made to her church; Lacon Rehab and Nursing Activity Fund; or MSW Projects. Online condolences can be left at lenzmemorialhome.com. Masks are Required.

To send flowers to the family or plant a tree in memory of Irma M. Watkins, please visit our floral store.

To send flowers to the family in memory of Irma Watkins, please visit our flower store.