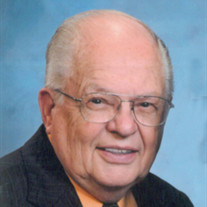 His Mass of Christian Burial will
be at 10:00 a.m. on Monday, April 14, 2014 at Holy Trinity Catholic
Church in Bloomington with Rev. Deo Gratias officiating. Rosary
will be recited at 3:30 p.m. on Sunday, April 13, 2014 with
visitation following from 4-7:00 p.m. at Kibler-Brady-Ruestman
Memorial Home in Bloomington. Full Military Rites will be accorded
by Bloomington-Normal American Legion Honor Guard.

Interment will be at East Lawn
Memorial Gardens Cemetery in Bloomington. In lieu of flowers,
memorials may be made to Holy Trinity Catholic Church or The Lewis
F. Fowler Scholarship Fund c/o Illinois State University School of
Agriculture.

Lew was born on December 13, 1931
in Downs, a son of William and Eva Esther Holt Fowler. He married
Mary E. Simpson on June 17, 1952 at Holy Trinity Catholic Church in
Bloomington. She survives.

Lew was a graduate and member of
the First Class of Octavia High School in 1950. He was an Army
Veteran, his basic training was at Camp Roberts California. He went
to Fort Hood on orders to go to Germany. These orders were changed
with him receiving orders to go to radio operations school, Camp
Chafree, AR. He then returned to Fort Hood with orders for Korea.
He was removed from those orders and sent to Fort Sill, OK for
radio repair school, then returned back to Fort Hood where he was
part of the Mars Radio Network until his discharge. He obtained the
rank of Corporal in The United States Army. He then returned to
Bloomington working for General Electric for several years. He then
began his career in banking at the National Bank of Bloomington
where he worked for 33 years, retiring in 1994. He later worked as
an usher and ticket taker at Illinois Wesleyan University and
Illinois State University sporting events.

He was a long time member of Holy
Trinity Catholic Church in Bloomington where he volunteered for 20
years at the St. Vincent DePaul Society Food Pantry. He also served
as a Eucharistic Minister. He was a member of the FR. John Ring
Counsel #574 Bloomington Knights of Columbus, where he was a
3rd and 4th degree Knight. He was a member of
Young at Hearts and Spirit Lifters.

He loved to travel to Branson, MO
with his wife. He enjoyed Country Western and Polka music. Lew
loved life, his family, friends and his neighbors. He will be
greatly missed.

To send flowers to the family or plant a tree in memory of Lewis F. "Lew" Fowler, please visit our floral store.

To send flowers to the family in memory of Lewis "Lew" Fowler, please visit our flower store.