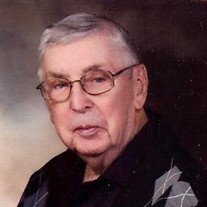 Born October 29, 1917 on the Buck Farm in Richland Township near Lacon to the late William and Estella Crabel Buck, he married Georgia M. McCully in the Lacon Methodist Church on June 7, 1940. She preceded him in death on December 1, 2014.

Ralph was also preceded by his brothers, Samuel and Wayne, and his son Forrest "Frosty" who was married to Sheila Moore. He worked at Caterpillar from 1964- 1981 and also farmed and maintained the family homestead.

Ralph is survived by Sheila and Ray Whited, Sherry and Randy Schoepke, Jenny and Jerry Mooberry all of Lacon, and their children: Madison, Gage, Hunter, Gavin, and Layla.

Services will be on Wednesday, April 22 at 10:00 am at Lenz Memorial Home in Lacon. Visitation will be on Tuesday evening from 5-7 pm. Burial will be in the Lacon Cemetery.

Memorials can be left to the Henry Methodist Church. Online condolences can be left at www.lenzmemorialhome.com.


To send flowers to the family or plant a tree in memory of Ralph L. Buck, please visit our floral store.

Please click here to view the video tribute
To send flowers to the family in memory of Ralph Buck, please visit our flower store.