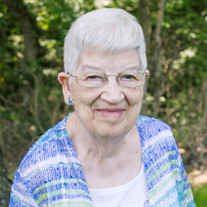 Wilma Farley, 87, of Henry, died on August 20, 2020 at Lacon rehab in Lacon. Born on January 21, 1933 in Steuben Township to the late William E. "Bud" and Ollie G (Rickey) Moore, she married Kenneth Farley on April 18, 1963 in Princeton. Kenneth passed away on October 2, 2000. She was also preceded in death by her sister Ima Jean Schlosser.
Wilma is survived by her daughters Annette (Rick) McMahan of Sparland & Roxane Wancket of Rock Falls; brothers Ronald (Cathy) Moore & Kenneth (Pat) Moore both of Lacon; sisters Nedra Bischler of Henry, Audrey (Gary) Loeser of Advance, North Carolina, Donna (Les) Hattan, Sheila (Ray) Whited & Mickie (Gale) Magnuson all of Lacon; brother-in-law Merle Schlosser of Lacon; grandchildren Tyler McMahan of Sparland, Perry Wancket of Rock Falls, Megan (Andy) Sadowski of Sparland and one great grandchild, Paige. Through her life, Wilma was a secretary for Northwest Termite & Pest Control in Henry, cared for children at the Children's Home in Peoria, took care of elderly folks in Henry in their homes, and was a greeter at Princeton WalMart. She was also a member of Immaculate Conception Catholic Church.
Wilma was an amazing lady. Her positivity, kindness, and willingness to care for people was life lived as an angel. She was the most amazing wife, mother, sister, grandparent, care giver and a wonderful person. She loved life to the fullest and made sure everyone around her did too.
Cremation rites have been accorded and a memorial mass will be held at 10 AM on Monday, August 24 at which Immaculate Conception Church in Lacon with burial of cremains to follow in Saint Patrick's Catholic Cemetery. A drive-through visitation will be held on Sunday from 2 to 5 PM at Lenz Memorial Home in Lacon. Please enter from the Ida Street side, the family will be present on the driveway to greet friends. Memorials can be made to St Jude or her church and online condolences can be left for Wilma's family at lenzmemorialhome.com

To send flowers to the family or plant a tree in memory of Wilma Farley, please visit our floral store.

Please click here to view the video tribute
To send flowers to the family in memory of Wilma Farley, please visit our flower store.