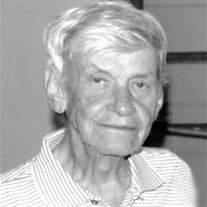 He enlisted in the U.S. Navy in December, 1937 at the age of 17, obtaining the rank of 2nd class yeoman. He was heading back from San Juan, Puerto Rico to New York in December of 1941 to receive his discharge. While on the ship back to New York, he heard over the ship's radio that the Japanese had bombed Pearl Harbor and realized his discharge wasn't going to happen. He served in the U.S. Navy during World War II in the Pacific, the first two years on an oil tanker and the final two years in the submarines, stationed out of Honolulu.

After his discharge at the end of the war, he returned to North Dakota where he began his career in the newspaper business, owning newspapers in Elgin, North Dakota, White Bear Lake, Minnesota, and finally the Lacon Home Journal.

He served as City Clerk while at Elgin, North Dakota and was a 45-year member of the Toluca Rotary Club. He was also a member of St. Edwards Catholic Church in Chillicothe.
He was once an avid hunter and fisherman, but in his later years enjoyed playing golf and just hanging with his kids and grandkids, making frequent trips to North Carolina, Montana, and California.

The family is planning a private graveside service at a later date. Lenz Memorial Home in Lacon is assisting the family with their arrangements.

To send flowers to the family or plant a tree in memory of Adrian "Ade" Sondag, please visit our floral store.

To send flowers to the family in memory of Adrian Sondag, please visit our flower store.