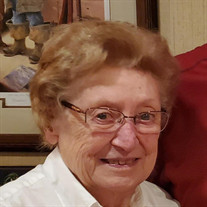 Alba McDonald left this mortal earth in the early morning of April 23, 2020, a little over a month after celebrating her 100th birthday. I'm sure when she arrived in Heaven the first thing she did was ask it she could help with something.

Alba was born to Dominico and Julia North Giugler on March 5, 1920 and grew up on a farm west of Sparland on Yankee Lane. She attended a one-room school in her early youth and later graduated from Sparland High School.

One of her first jobs was as a telephone operator working alongside her sisters, June & Mary Lou, in Chillicothe, IL.

She later married James McDonald and they had one son, Raymond, who survives his mother. While Raymond was a child Alba was at home raising her son while James worked for the Santa Fe Railroad. They were living in Chillicothe, IL at the time.

James, Alba and Raymond moved to Lacon, IL where Raymond went to school at Mid-County.

Alba became involved with the Lacon Women's Club and over the course of many years held several offices within the club as well as representing the LCW at national meetings. She later joined the Marshall County Historical Society and became a volunteer. Her chosen area to work was with the one-room school histories in Marshall County. Over the years she assembled the mountains of information into a coherent collection easily researched. She also served on the Board of Directors for the Society and her input was invaluable.

Alba never met anyone she wasn't friends with. She was easy to talk to and a fountain of information on many different topics.

Alba McDonald is survived by her son Raymond and many nieces and nephews. She was preceded in death by her husband, James, her sisters Rena June Jenkins & Mary Lou Winkler, and her brothers John, Reno "Bud" ,& Walt Giugler.

Graveside services was at 11am Wednesday, April 29, 2020 at the Yankee Lane Cemetery. A memorial service will be held at a later date.

In lieu of flowers donations may be made to the Marshall County Historical Society in Lacon, IL

To send flowers to the family or plant a tree in memory of Alba McDonald, please visit our floral store.

To send flowers to the family in memory of Alba McDonald, please visit our flower store.