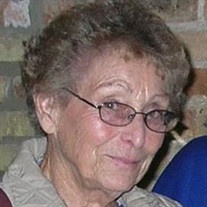 Pat was a wonderful homemaker and avid gardener. She was well-known for her culinary and baking talents, which she generously shared with family, friends and many members of the community. After marriage, Jim and Pat eventually moved to a small farm house at the edge of Lacon where they raised their two children, Debra and James. Nearing retirement, they built a home on the same property to allow them time to garden and spend cherished time with their four grandchildren, family and friends. Pat referred to Lacon as "God's country." She worked at the local A&P and Jim's IGA in Lacon for more than 35 years. She will be dearly missed.

Honoring her wishes, cremation rites have been accorded and a private family service will be held at a later date. Memorials may be made to Vitas Healthcare and online condolences can be left at lenzmemorialhome.com.

To send flowers to the family or plant a tree in memory of Alta "Pat" Strong, please visit our floral store.

To send flowers to the family in memory of Alta Strong, please visit our flower store.