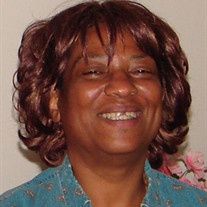 Anita was born on April 12, 1957 in
Chicago, IL, to the union of Arthur and Marion
Henton Moore, both of whom preceded her in death. She married
Emanuel Anderson on October 19, 2012 at Word of Life Ministries in
Bloomington, IL.

Anita graduated from Richards High
School in Chicago, IL, where she was a member and sang in the
Monument of Faith Church choir, under the pastorate of Dr. R. D.
Henton. She later graduated from the University of Arkansas in Pine
Bluff.

Anita was a member of Word of Life
Ministries in Bloomington, IL and was employed at
Heritage Manor in Normal, IL for 12 years as a CNA and care giver.
She loved to dance and step, her favorite artist was Isaac Hayes.
She enjoyed singing and appreciated opera music.

Also preceding her in death were
two sisters JoAnn and Linda.

A memorial service will be held at
11:00 a.m. on Friday, February 21, 2014 at Word of Life Ministries
719 W. Chestnut, Bloomington, IL with Pastor Charlotte Dotts
officiating. Visitation will be from 10-11:00 a.m. before the
service at the church on Friday. Kibler-Brady-Ruestman Memorial
Home in Bloomington is assisting the family with arrangements.

Cremation rites have been accorded.
Memorials may be made to the Neville House or the YWCA.

To send flowers to the family or plant a tree in memory of Anita Denise Moore Anderson, please visit our floral store.

To send flowers to the family in memory of Anita Anderson, please visit our flower store.