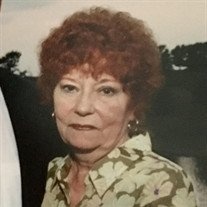 Anne "Rocky" L. Porch of Lacon, passed away peacefully at her home surrounded by her family on May 5, 2018. Rocky was born on February 22, 1930 in Prince Albert ,Saskatchewan Canada to the late Joseph and Irene Johnson Nelson. She married Melvin "Mel" Porch on April 16, 1955 in Pattonsburg at the Pattonsburg Christian Church.Mel died February 15, 2014.
Surviving are her children: Rocky (Eric) Schave of Henry, Jacque (Randy) May of Chillicothe, Penny (Steven) Green of Henry, Rick (Stephanie) Porch of Henry, Janey (Tony) Unruh of Pattonsburg, Bobbi (Kevin) Smith of Henry, Joydawn Porch Baldoni of Henry, Brandon (Shanelle) Porch of Henry, 23 grandchildren, 16 great grandchildren, sister Joanie Demers of Calgary Alberta Canada, Sisters in law Rosina Volker of Toluca, LaDonna Porch of Iowa, Linda Porch of Toluca, & Kay Porch Aldridge of Normal, brother-in-law Dale (Diane) Porch of Peoria and numerous nieces & nephews.
Also preceding her in death were brother Clarence Gunnville, sister Leona Eden, sister-in-law Twilla Andrew, brothers-in-law Barrett "Frosty" Porch, Stacey Porch, Norman Andrew, Harry Volker, and grandchildren Rachel & Korey Korenchuk.
Rocky served as a member of the third fighter wing of the Royal Canadian Air Force during the Korean War, where she traveled to many countries. She met the love of her life Mel in Zweibrucken, Germany where he was serving as a Ranger in the 82nd Airborne Division of the United States Army. She was a member of the First Presbyterian Church of Henry, where she was a Sunday school teacher for many years. She was also a telephone operator, caretaker of the elderly, and babysat many children throughout her life. She was a loving devoted Mother, Nana, Sister, Aunt, and a friend to many. Her two greatest passions in life are her family and her strong Christian faith. She enjoyed many years of camping and traveling to Canada with her family and friends. Her kids and grandkids were her life. She will always be in our hearts and memories. We will miss her forever.
Cremation rights have been accorded and a memorial service will be held at Lenz Memorial home in Lacon on Friday, May 11 at 11:30 with a visitation held one hour prior. Mingled inurnment of Rocky & Mel will be immediately following in the Belle Plain Baptist Cemetery near Pattonsburg, IL. Memorials can be made to the Paralyzed Veterans Association or Baby Fold and online condolences can be left at lenzmemorialhome.com.


To send flowers to the family or plant a tree in memory of Anne "Rocky" Porch, please visit our floral store.

Please click here to view the video tribute
To send flowers to the family in memory of Anne Porch, please visit our flower store.