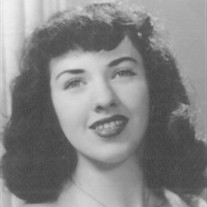 Her funeral Mass of Christian
Burial will be held at 10:00 a.m. on Tuesday, February 4, 2014 at
Holy Trinity Catholic Church in Bloomington with Reverend R.
Anthony Lee and Monsignor Doug Hennessy officiating.
Visitation will be from 4-7 p.m. on Monday, February 3, 2014 at
Kibler-Brady-Ruestman Memorial Home in Bloomington, where the
rosary will be recited at 3:30 p.m.

Burial will be in Eastlawn Memorial
Gardens in Bloomington.  Memorials may be made to the American
Diabetes Association, American Cancer Society or Holy Trinity
Catholic Church.  Kibler-Brady-Ruestman Memorial Home in
Bloomington is assisting the family with arrangements.

In addition to her husband, she was
preceded in death by her parents, her brother Robert Fitzpatrick,
nephew Thomas Fitzpatrick and son in law Steve Drake.

Annette was a long time piano
teacher in Bloomington/Normal where she taught hundreds of students
the love of music.  She was a past president of the Orpheus
Society and she traveled abroad with the Sounds of Hope
International Choir.  Annette volunteered at OSF St. Joseph
Medical Center in Bloomington, she was a long time member of Holy
Trinity Catholic Church; its choir and volunteered in may roles at
the Church.  She was a past president of the Holy Trinity
School Board.

Mrs. Reilly enjoyed bridge, dances,
and parties at Lakeside Country Club in her younger years.
She shaped the lives of many through piano and life
lessons.  She was so proud of her students' musical and
academic advancement that they were like a part of her own
family.  Her annual "Metamorphoses of Musicians" recitals were
very stressful, but rewarding events.

In her later years, Annette still
cared more for others than herself.  She lived her faith and
prayed daily for family, friends, and the whole world.  She
treasured being taken to mass by her children, family vacations and
holidays, and watching her grandchildren grow up.

The family would like to
acknowledge the outstanding services of Sue Deiss and Jan
Cole.  Without their patient and loving care, Mrs. Reilly
would have been unable to fulfill her profound wish of living in
her own home to her last day.  Annette will always be
remembered and greatly missed by all.

To send flowers to the family or plant a tree in memory of Annette M. Reilly, please visit our floral store.

To send flowers to the family in memory of Annette M. Reilly, please visit our flower store.