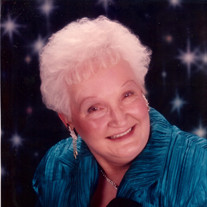 Barbara Ann Bean, 83, of Lacon, IL passed away on October 2, 2014 at OSF Saint Francis Medical Center in Peoria, IL. She was born on September 18, 1931 in Spring Valley, IL to Henry and Jean Kovach Jackson. She married Franklyn Bean on August 28, 1951 in Lacon, IL. He preceded her in death on November 13, 2010.
Surviving are two sons, Frank (Kim) Bean of Lacon; Bryan (Sherri) Bean of Wagner, OK; one daughter, Jayne (Brian) Deffenbaugh of Tucson, AZ; five grandchildren, three great-grandchildren, two step-grandchildren, and one step great-grandchild. Also surviving are her sisters Betty (Don) Kapraun of Metamora, Margaret Stadler of North Carolina, and Pam Shiffbauer of Texas.
She was preceded in death by her parents, husband, one son, and one great-granddaughter.
Barbara had worked at various jobs including Lacon Woolen Mill, Hobbs Manufacturing, St. Joseph, and had cooked at Cowells and Duck Inn.
Cremation rites have been accorded. Services will be held at a later date. Lenz Memorial Home in Lacon is assisting the family with arrangements.
Memorials can be made to a charity of the donor's choice. Online condolences may be left at lenzmemorialhome.com.

To send flowers to the family or plant a tree in memory of Barbara Ann Bean, please visit our floral store.

To send flowers to the family in memory of Barbara Bean, please visit our flower store.