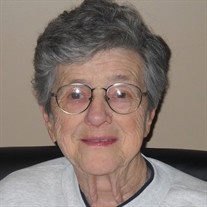 Barbara J. Kepper, 89, of Lacon, died on March 5, 2019 at St. Joseph Nursing Home in Lacon. Born in Lacon on June 17, 1929 to the late Art and Mildred Lyons Russell, she went to work at the woolen mill in Lacon and later St. Joseph's nursing home as a dietary aide. She also did In-home caregiving for people.
Barb is survived by: her sons Daniel (Susan) Davis of Henry, Gary (Linda) Davis of Lewiston, Robert (Terri) Davis of Lacon; daughters Pat (Asa) Nighswonger of Sparland, Barbara (Robert) Krafft of Henry, April Emond of Holiday Island AR; sisters Lillian McCaskey of Dixon, Gwen Kingen & Martha Wenz both of Lacon, Dan Stuart of Bauxite AR-who she helped raise,16 grandchildren and 34 great grandchildren. She was also preceded by two brothers, two sisters and two grandchildren.
A funeral service will be held Saturday, March 9 at 11 AM at Lenz Memorial Home in Lacon. Visitation will be one hour prior to service. Cremation rights will be accorded and burial of cremains will be in the Henry Cemetery at a later date. Memorials can be made to the Saint Joseph's Nursing Home activity fund and online condolences can be left at lenzmemorialhome.com


To send flowers to the family or plant a tree in memory of Barbara J. Kepper, please visit our floral store.

Please click here to view the video tribute
To send flowers to the family in memory of Barbara Kepper, please visit our flower store.