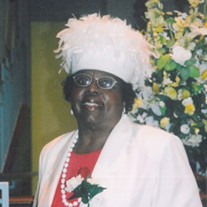 She was preceded in death by
8 brothers and sisters and a son in law, Earl Nicholas.

Beatrice was a member of Mt. Pisgah
Baptist Church where she served on the Mothers Board, Women on the
Move and the Married Couples Ministry. She was a member of the
minister's wives and widows of OWDBA. She worked registration at
OWDBA during annual sessions. Beatrice was a devout Christian and
church member. She loved the Lord and enjoyed discussing the Bible
with others.

Mother Johnson enjoyed being in her
church, her kitchen and her garden. She will be remembered by many
for her spirited conversations and commentary. Beatrice was
employed by Eureka-Williams Company for several years.

Funeral services will be at
11:00 a.m. Saturday, December 28, 2013 at Mt. Pisgah Baptist
Church. Rev. Dr. Frank L. McSwain Sr. will officiate. Interment
will be in Park Hill Cemetery mausoleum. Visitation will be on
Friday from 5 to 7 p.m. at Kibler Brady Ruestman Memorial Home,
Bloomington and 1 hour prior to the service Saturday at the church.
Memorial contributions may be directed to Mt. Pisgah Baptist
Church.

To send flowers to the family or plant a tree in memory of Beatrice S. Johnson, please visit our floral store.

To send flowers to the family in memory of Beatrice S. Johnson, please visit our flower store.