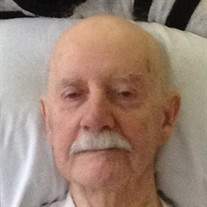 Benjamin C. "Ben" Curtis 87 of Naperville formerly of Lacon, Morton and Peoria,
died at Tabor Hills Healthcare in Naperville on November 6, 2014. Born in
Lacon on July 30, 1927 to the late Benjamin D. and Violet Lippelman Curtis, he
married Wilma Clarence on June 23, 1949 in Varna. She preceded him in death in
1983.

Ben served in the Navy during WWII and worked at Caterpillar in data processing
for 31 years, retiring in 1983. He was a member of the Peoria Federation of
Musicians.

Ben enjoyed golf and computers, but his true passion was music. He spent many
hours in his later years entertaining friends and family with his musical skills
on the Vibraharp and piano.

He is survived by: his sons Chris (Kristin) Curtis of Fenton, MO and Cary Curtis
of Shinnston, WV; his daughter Cathryn (Brad) Merryman of Naperville; and 7 grand
children.

Cremation rites have been accorded and a memorial service for Ben will be held
at the Lacon Sparland United Methodist Church in Lacon on Saturday, November 15
at 11:00 am with Reverend Mike Barclay officiating. A fellowship time will be held at
the church following the service. A private inurnment at the Lacon Cemetery Mausoleum will be done at a later date.

Memorials can be made to Tabor Hills Healthcare Facility in Naperville, Illinois. Online condolences can be left at lenzmemorialhome.com

To send flowers to the family or plant a tree in memory of Benjamin C. Curtis, please visit our floral store.

To send flowers to the family in memory of Benjamin Curtis, please visit our flower store.