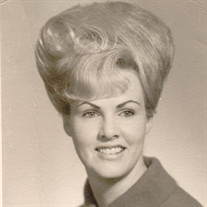 Bette J. Martin, 77, of Lacon, died on September 7, 2018 at Richard L. Owens Hospice House in Peoria. Born on October 17, 1940 to William and Dorothy Newman Gohl, she was married to William Kelly in 1959 and had two sons. she later married Joseph Martin on May 8, 2006 in Lacon. Joe passed away on June 8, 2015.After living in Evreux France and Heilbronn Germany as a military bride, Bette worked at Caterpillar for over 30 years starting in teletype communication and retiring as a supervisor. She was one of the first female Foreman at Caterpillar. She was an active member of the Lacon Sparland United Methodist Church.
Bette is survived by her mother Dorothy Hagar Of Creve Coeur; sons Ronald (Kim) Kelly of Pekin & Michael Kelly of Lacon; sister Shirley (Bert) Cusac of Creve Coeur; grandchildren Matthew, Lynsey, Zack, Carolynn, & Adam Kelly and Jason Demmin; step grandchild Danny Martin, six great-grandchildren and her little dog sophie. She was Preceded in death by her father William Gohl & sister Barbara Depuy.
A funeral service will be held on Saturday, September 15 at 11 AM at the United Methodist Church in Lacon with visitation held one hour prior to service. Burial will be in the Lacon Cemetery and memorials can be made to the American Cancer Society or her church. Online condolences can be left at lenzmemorialhome.com

To send flowers to the family or plant a tree in memory of Bette J. Martin, please visit our floral store.

Please click here to view the video tribute
To send flowers to the family in memory of Bette Martin, please visit our flower store.