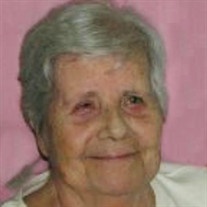 Betty was a stay at home mom and wife until her children were raised. She then took care of others in private care in their home eventually working her way up to an LPN license in 1979. She then worked at Perry Memorial Hospital in Princeton and Spring Valley Nursing Center. She was a devoted and loving mother, grandmother, aunt, and friend to all who knew her. Her joyful personality and unforgettable smile will be greatly missed.

A special thanks to the staff, Sisters, & Father Tom at Saint Joseph's and Vitas Hospice.

A Mass of Christian burial will be held at St. Joseph's Nursing Home chapel at 11:00 am on Thursday, December 8 with Father Tom Mizuer officiating. Visitation will be held one hour prior to the service. Burial will be in Elmlawn Cemetery in Princeton. Memorials can be made to the Multiple Sclerosis Society, Cystic Fibrosis Foundation in honor of Caleb Bickett, or St. Joseph's Nursing Home. Online condolences can be left at lenzmemorialhome.com

To send flowers to the family or plant a tree in memory of Betty J. Bickett, please visit our floral store.

Please click here to view the video tribute
To send flowers to the family in memory of Betty Bickett, please visit our flower store.