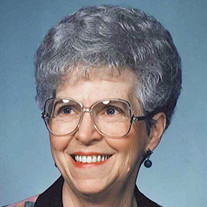 She was born October 22, 1926, in
Tamalco,Illinois, to Robert and Mabel (Terry) Hastings, the second
of nine children. She loved school and learning and completed 12
grades in 10 years.

Betty married Robert Johnson in Ft.
Smith, Arkansas, on July 22, 1944, where he was stationed during
World War II. Robert passed away September 22, 2011 after 67 years
of marriage. Betty missed him every day since that day.

She was a loving wife, caring
mother, and greatly loved grandmother. Betty was an exemplary
hostess and an outstanding cook. Many people enjoyed her gifts of
pies, cookies, and homemade bread. Doing for others brought her
great joy.

Betty worked at the bank in
Stanford for many years retiring from there in 1992. She was known
for helping with painting and decorating projects at the Stanford
Church of God and Cross Pointe Church of God through the years.

Visitation will be Sunday, January
5, 2014, at Cross Pointe Church of God, 3101 Airport Road,
Bloomington, Illinois, from 4-7 p.m. The celebration of life will
be Monday, January 6, 2014, at 11:00 a.m. at Cross Pointe Church of
God in Bloomington. Pastors Ralph Barclay and Terry Arington, will
lead the service assisted by the pastoral staff. Burial will follow
at Mt. Pleasant Cemetery near Stanford, Illinois.
Kibler-Brady-Ruestman Memorial Home in Bloomington is handling
arrangements for the family.

Memorial donations may be given to
Cross Pointe Church of God.  Online condolences may be sent to
the family at kiblerbradyruestman.com.

To send flowers to the family or plant a tree in memory of Betty Jean Johnson, please visit our floral store.

To send flowers to the family in memory of Betty Jean Johnson, please visit our flower store.