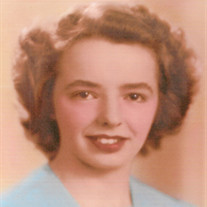 Her funeral will be at 11 am
Wednesday, February 27, 2013at Trinity Lutheran Church in
Bloomington, with Pastor Chris Nitzel officiating. Visitation will
be one hour prior to the service at the church. Burial will be in
East Lawn Memorial Gardens, Bloomington. Kibler-Brady-Ruestman
Funeral Home is assisting the family with arrangements. Memorial
contributions may be directed to Trinity Lutheran Church,
Bloomington.

She was preceded in death by her
two sisters.

She graduated from LeRoy High
School in 1944 and graduated from Illinois Commercial College,
Champaign in 1945. She was employed by Western Union in
downtown Bloomington

Betty was a long time member of
Trinity Lutheran Church and co-president of the Esther Circle and
other organizations at church. She volunteered at the Mennonite
Thrift Shop and the Mennonite and Brokaw Hospitals for over 30
years. Betty enjoyed playing Canasta and started a card club that
was in existence for over 50 years.

Online condolences and expressions
of sympathy can be directed to the family at
kiblerbradyruestman.com

To send flowers to the family or plant a tree in memory of Betty J. Elliott, please visit our floral store.

To send flowers to the family in memory of Betty J. Elliott, please visit our flower store.