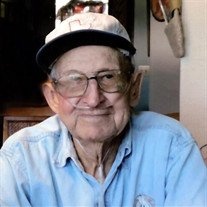 Carl was an agriculture mechanic and farmer for over 40 years in the Henry area and served in the Army during Korea.

He was also preceded in death by his son Daniel, 6 brothers, and 1 sister.


To send flowers to the family or plant a tree in memory of Carl William Rott, please visit our floral store.

Please click here to view the video tribute
To send flowers to the family in memory of Carl Rott, please visit our flower store.