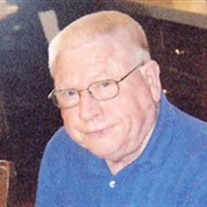 
He was preceded in death by his parents, one sister, one brother,
his son Steven, and one granddaughter, Teresa
Moore.


Carl worked at Caterpillar, Inc. on and off for 25 years doing
jobs ranging from machinist to factory planner.  He also
worked at Southern Peru Copper Corporation in Toquepala, Peru for 4
years and ran Shafer Sundries in Lacon for 5 years.


He confirmed his faith and was baptized at the First Baptist
Church in Sparland.  He was a member of the Family Motorcoach
Association.


Funeral services will be held at 10:00 am on Thursday, December 5,
2013 at the Lenz Memorial Home in Lacon, IL.  Pastor  Joe
Horn will officiate.  Visitation will be held on Wednesday
evening from 5-7 pm at the funeral home.  Burial will be in
the Henry Cemetery.


Memorial contributions may be made to a charity of the donor's
choice. Online condolences may be sent to the family at
lenzmemorialhome.com.

To send flowers to the family or plant a tree in memory of Carl W. Shafer, please visit our floral store.

To send flowers to the family in memory of Carl W. Shafer, please visit our flower store.