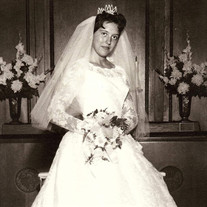 VARNA- Carol Ruth Donelson, 73, of Varna, passed away at 4:14 pm on Monday December 12, 2016 at OSF Saint Francis Medical Center in Peoria.
A visitation will be held from 4-7 PM on Tuesday December 20, 2016 at Lenz Memorial Home, 823 5th St. in Lacon. Cremation rites will be accorded and private inurnment will be at a later date.
Memorials may be given to a charity of the donor's choice. Lenz Memorial Home in Lacon is assisting the family with arrangements.
Carol was born in Peoria on July 29, 1943, a daughter to Joshua Jay and Zella Irene Shurts Meyers. She married Sebert Inar Donelson in Varna on September 29, 1963. He survives.
Also surviving are a son, Sebert J. (Connie) Donelson, Granville; a daughter, Zina (Scott) Sager, Varna; and 4 grandchildren, Jason, Jesse, Kaylynn, and Matthew.
She was preceded in death by her parents; 2 sisters, Elenor and Fran; and a brother Don.
Carol attended The Varna Methodist Church. She enjoyed knitting, dancing, and cooking and especially time spent with her family and grandchildren.
Online condolences may be directed to her family at www.lenzmemorialhome.com


To send flowers to the family or plant a tree in memory of Carol Ruth Donelson, please visit our floral store.

To send flowers to the family in memory of Carol Donelson, please visit our flower store.