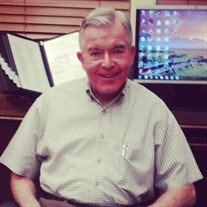 Charles L. Allen, 84, of Lacon, passed away on May 20, 2018 at his residence. Born in Peoria on July 24, 1933 to the late Joseph and Hester Collins Allen, he served his country in the Air Force and attended Michigan State graduating in 1955.
He is survived by his niece Laura (Ric) Tanner of Los Angeles and their children Luke & Riley and nephew Todd (Matahari) Allen of Hawaii and their children Jahe, Soleh, & Laki.
After college and the military Charlie came back to Lacon to run the family lumberyards. With his brother Joe Jr., Charlie Became a community leader in helping charitable organizations and churches reach their goals. Sadly his brother Joe died in February 2002. Charlie, still at the helm of Allen Lumber Company, made the decision to end his career in the hardware and lumber business. So in 2005 Charlie retired to the Allen Family Partnership to run the family investments and continue the benevolent anonymous donations to so many charitable organizations, colleges, & funds across his community, state, & nation. He was on the board of the First National Bank of Lacon, Lacon Country Club, Lacon Economic Development, Lacon Chamber of Commerce, and the Marshall County Airport Board to name a few. The Airport was his favorite; he became president of the board in 1966 and served till his death. Charlie spearheaded the first Fly in Breakfast there, now held annually on Father's Day. As an avid Rotararian he spent over 50 years of never missing a meeting and helping enrich his community.
Charles Allen will be lying in state at Lenz Memorial Home in Lacon on Thursday, May 24 from 1 to 7 PM for the community to pay their respects. The family will not be available at that time. A mass of Christian burial will be held on Thursday, June 7 at 11 AM at the Immaculate Conception Church in Lacon with family available one hour prior at the church. Burial will be in the Lacon Cemetery and memorials can be made to the Immaculate Conception Church or a charity of your choice. Online condolences can be left at lenzmemorialhome.com

To send flowers to the family or plant a tree in memory of Charles L. Allen, please visit our floral store.

To send flowers to the family in memory of Charles Allen, please visit our flower store.