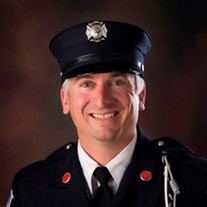 Hudson-Christopher "Chris" R. Brown, 39, of
Hudson, passed away on Tuesday, March 5, 2013 at 11:38 p.m. at
Advocate  BroMenn Medical Center emergency room in
Normal. Funeral services will be at 10 a.m. Monday, March 11,
2013 at  Eastview Christian Church in Normal with Rev. Ken
Graham officiating. Visitation will be from 4-8 p.m. Sunday, March
10, 2013 at the church with a firefighters walk through from
6:30-7:30 p.m. on Sunday. In lieu of flowers, memorials may be made
to the Max and Mason Brown education scholarship fund in care of
CEFCU, 2323 East Empire Street, Bloomington, IL 61704.
Kibler-Brady-Ruestman Memorial Home in Bloomington is assisting the
family with arrangements.

He was a 1992 graduate of
Charleston High School.

He was a loving husband and a
loving father to his two sons. He took such pride in watching his
sons playing in a variety of sports. He was very involved with his
sons in scouting and loved fishing and camping. Chris wore a smile
that was infectious to all that met him. He enjoyed playing hockey
and was a Blackhawks Hockey fan.

To send flowers to the family or plant a tree in memory of Christopher "Chris" R. Brown, please visit our floral store.

To send flowers to the family in memory of Christopher R. Brown, please visit our flower store.