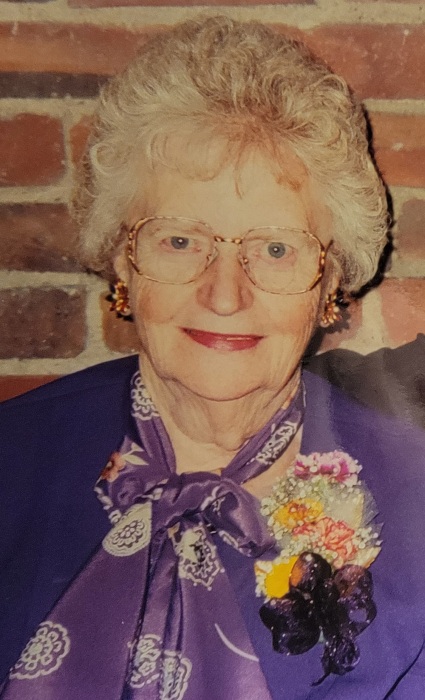 Clarabel S. Riddell, 97, passed away suddenly on March 9, 2021, in Joliet, IL. She was the youngest of five children born to Adolph and Clara Pearl (Antrim) Schoof on February 25, 1924, in Henry, IL.  She received her degree from Blackburn College and later worked for the Marshall County Farm Bureau.  In 1948, Clarabel married James S. Riddell.  He preceded her in death in 2008, after nearly 60 years of marriage. They resided on the family farm in Sparland, IL most of their married life where they raised five children: William Joe (Susanne) Riddell of Sparland, Mary Louise (Gregory) Kessling of Joliet, Marjorie Jean (the late Richard) Gilmore of El Paso, James Robert (Sally) Riddell of Sparland, and Nancy Pearl (Douglas) Riddell-Dudra of Medina, MN.

Clarabel was an active member of the La Prairie United Presbyterian Church where she devoted countless hours in service teaching Sunday School and Vacation Bible School, singing in the choir, member of the women’s missionary group and more.  She was a vital part of Wellgreen Hereford Farm/Riddell Polled Herefords where she was a meticulous record keeper.  As part of her role in the family business and due to her love for and belief in agriculture, she served as president of the Illinois Beef Auxiliary traveling the state with speaking engagements, as well as attending seminars and meetings at the national level. She was active in the Marshall County Historical Society holding numerous offices, helping to edit and compile the Sparland History Book and “Barn Again” book within that organization. Clarabel was a familiar face being an election judge for Steuben Township. She also enjoyed keeping vital records for family genealogy, was a creative seamstress, great cook, and dedicated mother. In 1993 Clarabel was humbled to be chosen the Illinois Mother of the Year.

Even with all the titles and notoriety she had in many organizations, to her, they paled in comparison to the pride she felt in her titles of wife, mother, grandmother, great-grandmother and most importantly, child of God.

To send flowers to the family or plant a tree in memory of Clarabel Riddell, please visit our floral store.

To send flowers to the family in memory of Clarabel Riddell, please visit our flower store.