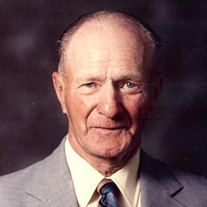 Bradford- Clarence R. Endress, 98, of Bradford, IL formerly of
Wyoming, IL passed away at 5:30 am on Monday, March 4, 2013 at the
Bradford Courtyard Estates where he had been a resident.

He was preceded in death by five brothers, one sister, one
daughter-in-law, one grandson-in-law, and two great
grandchildren.

Clarence was a lifelong farmer and loved to work in his garden up
until his retirement to Bradford a few years
ago.

He was a member of the LaPrairie United Presbyterian Church, the
Marshall-Putnam Farm Bureau, and the Illinois Corn Huskers
Association.  He participated in many state and national corn
husking contests well into his 80's and set an unofficial world
record picking at a county contest in 1938.

Funeral services will be held at 10:00 am on Saturday, March 9,
2013 at the Lenz Memorial Home.  Pastor Robert Murphy will
officiate.  Visitation will be held on Friday evening from 4-7
pm at the funeral home.  Burial will be in the Marshall County
Lawn Ridge Cemetery.

Memorial contributions may be made to his church or the Illinois
Corn Huskers Association. Online condolences may be sent to the
family at
lenzmemorialhome.com.

To send flowers to the family or plant a tree in memory of Clarence R. Endress, please visit our floral store.

To send flowers to the family in memory of Clarence R. Endress, please visit our flower store.