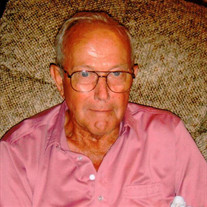 Clark J. Austin, 87, of Varna, passed away on January 10, 2018 at Unity Point Methodist in Peoria surrounded by his loving family. Born March 1, 1930 to the late Floyd and Pearl Peterson Austin, he was a lifelong resident of Varna and graduate of Varna High School. Clark served in the Army in the 1950's in Germany and Russia. Clark married Velma Foster on May 14, 1954 in Mc Nabb.
Clark worked as a machinist for Caterpillar, at the Marshall County Highway Department and later worked for JP Hollerich Co. before he became a partner in Universal Contracting in Peru for 20 years until retirement. He was an avid Sports fan and golfer, with four certified hole in ones. He enjoyed hunting and had a great love for his red and black raspberries. Clark was a member of the Magnolia Legion and the First Lutheran Church of Varna.
Clark is survived by his wife; daughter Rhonda (Jerry) Neuhalfen of Henry; son James (Nancy) Austin of Shawnee KS; Four grandchildren Heather (Scott) Toon of Washington, Julie (Tim) Davis of Big Lake MN, Lindsay (Troy Keefer) Neuhalfen of Washington, Jeffrey Austin of Shawnee Kansas; four great grandsons Jackson & Jase and Mason & Austin; and his faithful dog BJ. He was also preceeded in death by his two brothers.
As were Clark's wishes, cremation rights have been accorded and a military graveside service will be held at a later date in Varna Salem Lutheran cemetery #2. Memorials can be made to the Varna Ambulance, Magnolia Legion, or donor's choice and online condolences can be left at lenzmemorialhome.com

To send flowers to the family or plant a tree in memory of Clark J. Austin, please visit our floral store.

To send flowers to the family in memory of Clark Austin, please visit our flower store.