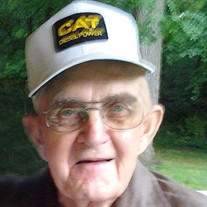 Clyde was an operating engineer and member of Local #649 for over 50 years, and served in the Navy during WWII. He enjoyed socializing with his wife, family, and friends, camping at Kentuckyana and the St. Louis Cardinals. He will be greatly missed and will always be remembered as a gentle person who found good in everyone. He never met a stranger that didn't become his friend.

A funeral service will be held on Thursday, April 21, 2016 at 11 am at Lenz Memorial Home in Lacon. Visitation will be on Wednesday from 5-7 pm also at Lenz. Burial will be in the Lacon Cemetery.

Memorials can be made to the Chillicothe Christian Church or St. Joseph's Nursing Home Activity Fund. Online condolences can be left at lenzmemorialhome.com


To send flowers to the family or plant a tree in memory of Clyde Allen Rickey, please visit our floral store.

Please click here to view the video tribute
To send flowers to the family in memory of Clyde Rickey, please visit our flower store.