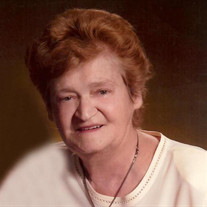 Crystal worked as a waitress with a majority of her time spent at Sam's Pizza in Lacon where she worked from the day it opened till Sam's retirement. She also was at Club Lacon before retiring. Crystal loved to bowl in the local leagues and the friends she made.

A memorial service will be held on December 12 at 6:30 pm at Lenz Memorial Home in Lacon with a visitation one hour prior to the service. Memorials can be made to the activity fund @ Heritage Manor. Online condolences can be left at lenzmemorialhome.com.


To send flowers to the family or plant a tree in memory of Crystal A. Russell, please visit our floral store.

To send flowers to the family in memory of Crystal Russell, please visit our flower store.