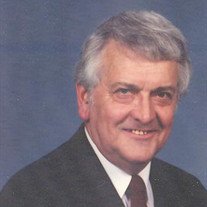 
He was born on September 19, 1929 in Little Chute, Wisconsin, to
William and Marie Coonen Vander Pas, who came to the United States
from Holland in 1902. He was the youngest of nine children. He
married Wanda E. "Betty" Drefs of Eureka on September 1, 1951 at
Our Redeemer Lutheran Church in Eureka. She survives.


His parents; three brother; and four sisters preceded him in
death.


An Army veteran, Bill served his country during the Korean War. He
was a member of the Eureka American Legion Post #466.


Bill worked for Montgomery Ward as a retail merchandiser for 42
years, retiring in 1991. He was a member of Our Redeemer Lutheran
Church since 1952 and had served time as Elder Secretary,
treasurer, trustee, and Sunday school superintendent. He was also a
member of the Eureka Sportsman Club.


Funeral services will be held at 11:30 am on Monday April 1, 2013
at Our Redeemer Lutheran Church in Eureka. Pastor Joe Burns will
officiate. Visitation will be held from 10-11:30 at the church
prior to the funeral. Entombment will be held at the Star of Hope
Chapel Mausoleum at Highland Memorial Park in Appleton, WI, which
is located 20 miles from Lambeau Field, home of the World Champion
Green Bay Packers, America's Team.


Memorial contributions may be given to Our Redeemer Lutheran
Church in Eureka. Online condolences may be set the family at ruestmanharrisfuneralhome.com.

To send flowers to the family or plant a tree in memory of Cyril "Bill" Vander, please visit our floral store.

To send flowers to the family in memory of Cyril "Bill" Vander, please visit our flower store.