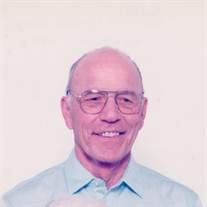 Dale F. Johnson, 95, of Lacon Ill., died on January 19, 2021 at Heartland Healthcare in Henry. Born in Minonk on May 29th, 1925 to the late Carl and Alta North Johnson, he married June Painting on April 30, 1947 in Phoenix. June died on February 15, 2001.
Dale served his country in the Navy during World War II, was a Mason, and a lineman with CILCO for 34 years, retiring in 1979. Everyone that knew Dale, knew his signature grin. He and June liked to go to the Hub Ballroom to swing dance and listen to big bands. They eventually moved to Arizona and enjoyed frequenting jazz festivals while there.
Dale is survived by: his son Bruce (Catherine) Johnson of Lacon; daughter Gail Wolfe of O'Fallon Mo.; grandchildren Carly Johnson of Lacon, Abigail Johnson of San Francisco, Stuart (Raechel Abel) Johnson of Chillicothe, Trevor Wolfe of O'Fallon Mo., Janel (Rick) Wolfe-Sykora of Lake St. Louis Mo. Tim (Stephanie) Wolfe of Lake Bloomington; great- grandchildren Jackson, Alexa, Emerson, Carson, Kennedy, Amelia, Maxwell, Beckett, and Ethan. He was also preceded in death by his two sisters Adelia Wendland and Marjorie Hindert.
Cremation rites have been accorded and a celebration of life will be held at a later date with burial in the Lacon Cemetery. In lieu of flowers, memorials can be made to Heartland Healthcare activity fund and online condolences can be left at lenzmemorialhome.com

To send flowers to the family or plant a tree in memory of Dale F. Johnson, please visit our floral store.

To send flowers to the family in memory of Dale Johnson, please visit our flower store.