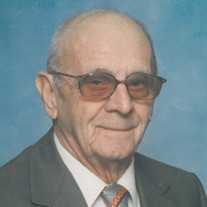 Dale was born July 22, 1923, in
Hudson Township, a son of Lloyd and Mabel Schlosser Troyer. He
married DuVaune Strauch on Feb. 11, 1951, at St. Paul's Lutheran
Church, Forrest. She survives.

Dale was preceded in death by his
parents; two brothers, Erwin and Verlin; and one sister,
Earlene.

His funeral will be at 11 a.m.
Tuesday at Kibler-Brady-Ruestman Memorial Home, Bloomington.
Visitation will be 4 to 7 p.m. Monday at the funeral home.
Interment will be in Hudson Township Cemetery.

Dale was proud of his service in
the Pacific during World War II, where he guided the B-29 bombers
with a searchlight during missions. He was a member of Bloomington
Veterans of Foreign War and Normal American Legion.

In the 1950s, Dale was a stock car
driver and set three track records three nights in a row. Later, he
loved tractor pulling with his "Minnie-Mo."

A lifelong farmer, Dale helped haul
grain to the grain elevators and was still actively engaged in
farming with his son, Les, at 90 years of age. He was a member of
Two Cylinder Club, collector and restorer of John Deere
two-cylinder tractors.

Dale had an excellent sense of
humor and liked to donate the cantaloupe, watermelon and sweet corn
from his garden.

Before his death, Dale flew on the
Land of Lincoln Honor Flight with his cousin, Bill Schlosser. This
experience allowed him to tour our nation's capital in Washington,
D.C., and visit the World War II memorials. It was his wish to
support this important and complimentary service; therefore,
memorials are to be made to Land of Lincoln Honor Flight, 57
Country Place, Springfield, IL 62703-5310.

Condolences and memories may be
made at www.kiblerbradyruestman.com

To send flowers to the family or plant a tree in memory of Dale W. Troyer, please visit our floral store.

To send flowers to the family in memory of Dale W. Troyer, please visit our flower store.