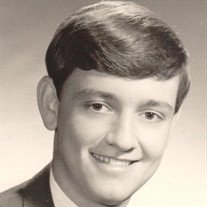 Dan Edward Harvey, 68 of Lacon, died on September 8, 2018 at Farmington Country Manor in Farmington. Born on February 3, 1950 in Peoria to the late John and Audrey Eaton Harvey. He served his country in Vietnam where he was wounded.
Dan was an avid sports fan especially following the Yankees and participating as a golfer and bowler in local leagues. He also participated in golf tournaments put on by the National Amputee Golf Association.
Dan is survived by: his brother Rich Harvey of Lacon, sister Kathy Harvey of Peoria, nephew Skipp (Suzanne) Harvey of San Jose CA, niece Beth Harvey-Diaz of Peoria, great nephews John Diaz of Peoria & Sam Diaz of Spokane WA and Kaden Harvey of San Jose CA.
Cremation rights have been accorded and Dan's remains will be in state at Lenz Memorial Home in Lacon on Friday September 14 from 2 PM to 7 PM. A private family burial will be held at a later date in the Lacon Cemetery. Memorials can be made to the ARK or the Wounded Warrior Project. Online condolences can be left at lenzmemorialhome.com


To send flowers to the family or plant a tree in memory of Dan Edward Harvey, please visit our floral store.

To send flowers to the family in memory of Dan Harvey, please visit our flower store.