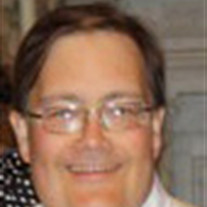 
Roanoke - Deacon Andrew Heckman, 45, of Roanoke, formerly of White
Heath, IL, passed away at 9:25 am on Wednesday February 5, 2014 at
the University of Chicago Hospital in Chicago.


He was born on September 13, 1968 at the Eglin Air Force Base in
Walton Beach, FL, to Danny and Suzzee Kallembach Heckman. He
married Jennifer Shelton on September 4, 1999 in Monticello, IL.
She survives.


Also surviving are his two daughters, Lottie and Frannie Heckman of
home; his parents, Danny & Suzzee Heckman of White Heath, IL;
one sister, Jean (Paul) Harralson of Mt. Vernon, IN; one niece,
Madalyn Harralson; and his father and mother in law, Merle and
Marcia Shelton of Bellflower, IL.


He was preceded in death by his paternal and maternal
grandparents.


To Andy, church and family was his life. He had a passion to serve
others even when his physical ailments limited his ability. He will
be greatly missed by those who knew him and to those whom he
served.


Funeral mass will be held at 10:00 am on Tuesday February 11, 2014
at St. Joseph Catholic Church in Roanoke. Monsignor Charles Beebe
will officiate. Visitation will be held from 4-7 pm on Monday
February 10, 2014 at St. Joseph Catholic Church with a Rosary
service at 3:30 pm prior to the visitation at the church.
Additional visitation will be from 9-10 am on Tuesday at the
church. Graveside burial services will be held at 2:30 pm on
Tuesday at the Bellflower Township Cemetery and the family will
receive friends following the burial at the Bellflower Community
Center.


Memorial contributions may be made to assist the family at a
memorial fund that has been established at the Roanoke-Benson
Community Bank in Roanoke. Online condolences may be made to the
family at www.knappjohnsonharris.com.

To send flowers to the family or plant a tree in memory of Deacon Andrew Heckman, please visit our floral store.

To send flowers to the family in memory of Deacon Andrew Heckman, please visit our flower store.