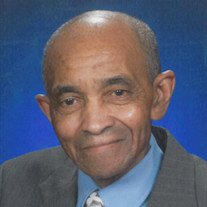 His funeral service will be held at
12:00 p.m. noon on Saturday, May 3, 2014 at Loving Missionary
Baptist Church in Bloomington with Pastor William L. Johnson
officiating.  Visitation will be held from 10:00 a.m. until
the time of services at the church on Saturday.

Cremation rites will be accorded
following the services.  Inurnment will be held at a later
date at Evergreen Memorial Cemetery in Bloomington.  In lieu
of flowers, memorials may be made to Loving Missionary Baptist
Church or to the Alzheimer's Association.  The family of
DeWitt has entrusted Kibler-Brady-Ruestman Memorial Home in
Bloomington to handle arrangements for their loved one.

In addition to his wife,
Gertrude,  DeWitt was preceded in death by his parents; a
daughter, Sandra Taylor; a grandson, Derrick Taylor; and a brother,
Benjamin Taylor.

He was one of the founding members
of  Loving Missionary Baptist Church in Bloomington where he
served as a deacon, a trustee and a Sunday school teacher. He was
also a member of the male chorus and the Missionary Society. He
trained candidates for deacon ship and he spent countless
hours  mentoring young men throughout the community.

DeWitt was a member of MAPP
(Minority and Police Partnership), Illinois Cemetery and Funeral
Home Association and NAACP.  He was a trustee for many years
at Evergreen Memorial Cemetery in Bloomington.

DeWitt was a very kind and sweet
man with a loving nature.  He didn't have a problem "telling
it like it is". In a tactful manner. He served others by dedicating
his time as a volunteer at numerous nursing homes. DeWitt and his
late wife, Gertrude would host annual Christmas shopping trips for
nursing home residents, through the Missionary Society at Loving
Missionary Baptist Church.  They truly enjoyed this annual
event by bringing joy to others.

The family wishes to extend special
thanks to Dr. Kenney, Angela and Asta Care for the "special care"
and consideration shown to our Daddy for many years.  To the
Loving Missionary Baptist Church family and friends, we thank you
for your continuous prayers and visits to our Daddy throughout the
years.

To send flowers to the family or plant a tree in memory of DeWitt Taylor,, please visit our floral store.

To send flowers to the family in memory of DeWitt Taylor,, please visit our flower store.