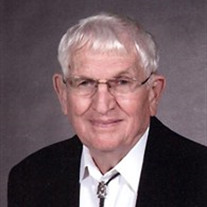 Donald L. Condit, 88, of Henry, IL formerly of Lacon and Putnam
passed away at 8:24 pm on Monday, July 8, 2013at Perry Memorial
Hospital in Princeton, IL.


He was born on January 11, 1925 in Henry, IL the son
of the late Lennis and Ethel Longman Condit.  He married
Amanda Knoblauch on November 22, 1952 in Washburn, IL.  She
survives.


He was preceded in death by one brother, Kenneth
Condit.


Don worked as a farmer all of his life.  He and
his wife owned Condit's Riding Stable in Putnam, IL and furnished
horses for Girl Scout Camps throughout the area for over 30
years.


Don was very active in conservation, along with
other civic duties.  He was a member of the Immaculate
Conception Church and Third Order member of St. Francis.  He
served on the Mid-County Board of Education; was a 4-H Club leader
for 20 years; served on the Marshall-Putnam Farm Bureau Board;
Board member of Marshall-Putnam Extension Council; Precinct
Committeeman for Hopewell Township; picked as Outstanding Young
Farmer for Jaycees, local and state; helped organize Washburn Song
and Saddle Club and was a member for forty-nine years; Director of
Marshall-Putnam Soil and Water Conservation District for forty
years, chairman ten years; member of the Association of Illinois
Soil and Water Conservation District, Secretary and Convention
Chairman seven years; Governor's Advisory Board for AISWCD; Charter
member of Heartland Resource Council, Peoria; Charter member of
Resource Conservation and Development; Charter member of Illinois
River Soil Conservation Task Force and member of Air National
Guard, Peoria.


Funeral services will be held at 11:00 am on Friday,
July 12, 2013 at the Immaculate Conception Church.  Father Tom
Mizeur will officiate.  Visitation will be held on Thursday
evening from 5-7 pm at the church and one hour prior to the funeral
service.  There will be a rosary service at 4 pm on Thursday
evening at the church. Burial will be in the Immaculate Conception
Cemetery.  Lenz Memorial Home in Lacon is assisting the family
with their arrangements.


Memorial contributions may be made to the Henry
Nutrition Center, Henry Ambulance, or the American Heart
Association.  Online condolences may be sent to the family at
lenzmemorialhome.com.

To send flowers to the family or plant a tree in memory of Donald L. Condit, please visit our floral store.

To send flowers to the family in memory of Donald L. Condit, please visit our flower store.