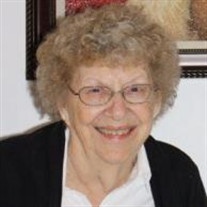 Donna L. Cramer, 88, of Lacon passed away at 11:00 PM on December 20, 2016 at OSF Medical Center in Peoria. Cremation rites have been accorded at Lenz Memorial Home, Lacon. Visitation will be held on Thursday, December 29th from 5:30-7:00 at the funeral home. Memorial services will take place at Lenz Memorial Home on Friday, December 30th beginning at 11:00 AM.
Donna was born February 17, 1928 in Peoria, the daughter of the late Harry E. and Nora E. (Broaddus) Taylor. She married Emil F. (Frank) Cramer on April 23, 1950.
She graduated from Lacon High School in 1946. Upon graduation, Donna worked for Northern Illinois Public Service in Lacon. In 1950, she went to work as a secretary for the Great Central Insurance Company in Peoria. In 1958, Donna became the legal secretary for the law firm of Pace and Paolucci, which later became Pace, McCuskey and Galley. She worked there until her retirement in 1988. Donna was a member of the Lacon United Methodist Church, the American Legion Auxiliary and had served on the Lacon Library Board.
Donna was a loving wife, mother and grandmother. Her greatest joy was watching her four great-grandchildren grow up. She enjoyed traveling, reading and spending time with her family. Each year she always looked forward to the family fishing trip to East Silent Resort in Minnesota.
Survivors include her husband of 66 years, one daughter, Connie (Dennis) Anderson of Princeton, three granddaughters, Kristin (Steven) Peterson of Secor, Meredith (Jamie) Hattan of Lacon, Missy Anderson of Princeton, and 4 great-grandchildren, Kyndal Emilee, Kourtlyn Elizabeth, Kaylor Allen and Kendryck Robert.
Memorials can be directed to Special Olympics Area 16 or to the Lacon/Sparland Ambulance and Fire Protection District. Online condolences may be sent to www.lenzmemorialhome.com.


To send flowers to the family or plant a tree in memory of Donna Cramer, please visit our floral store.

Please click here to view the video tribute
To send flowers to the family in memory of Donna Cramer, please visit our flower store.