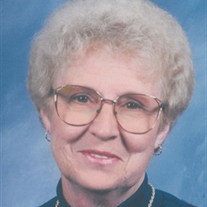 Her Mass of Christian Burial will
be held at 11:00 a.m. on Monday, August 19, 2013 at Epiphany
Catholic Church in Normal with Msgr. Eric Powell officiating.
Visitation will be from 9:00 a.m. until the time of Mass at the
church on Monday.

Interment will be at Holy Cross
Catholic Cemetery in Normal.  In lieu of flowers, memorials
may be made to Epiphany Catholic Church Building Fund.
Kibler-Brady-Ruestman Memorial Home in Bloomington is assisting the
family with arrangements.

Dorothy was a member of Epiphany
Catholic Church in Normal and a member of the McLean County Farm
Bureau in Normal.  She loved reading, and attending auctions
at the Wapella Auction House with her husband, Lyle.  She was
an avid bowler in her younger years and enjoyed helping her husband
on the family farm.

Dorothy and Lyle enjoyed traveling
to Europe and Hawaii.  They raised chickens and had an egg
delivery route. Dorothy enjoyed baking and shared her talent by
providing desserts for Funeral Committee at Epiphany Church.
She was also a member of the Alter and Rosary Society.

She was a loving wife, mother and
grandmother who loved her family and special times she shared with
her four sisters.

She will be sadly missed by her
family and friends.

To send flowers to the family or plant a tree in memory of Dorothy M. Schopp, please visit our floral store.

To send flowers to the family in memory of Dorothy M. Schopp, please visit our flower store.