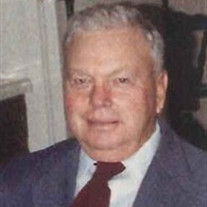 Gridley- Duane Guth, 84, of Gridley, IL passed away at 8:50 am
on Tuesday, December 3, 2013 at his home in Gridley after an
extended illness with strokes and Parkinson's disease.


He was born on May 31, 1929 in rural El Paso to Sol and Elsie
Heiple Guth.  His family moved to a farm south of Gridley
where he farmed until his retirement in 2006.


He was preceded in death by his parents, two brothers, Robert and
Emerson, one sister, Arlene Poppe, and an infant daughter.


Duane graduated from Gridley High School and attended Brown's
Business College in Peoria.  Besides farming, he worked in
retail stores in the area during the winter.  He enjoyed
playing pinochle with private and Senior Citizen groups.  He
also enjoyed music.  He played the piano and organ and enjoyed
singing with the church choir and community chorus.  Duane had
traveled to 30 of the states including Canada and Mexico before he
became unable to drive.


The family attended the First United Church in Gridley where
funeral services will be held at 1:00 pm on Saturday, December
7, 2013.  Rev. Andy Huette will officiate.  Visitation
will be held from 11-1 pm at the church before the service.
Burial will be in Gridley Cemetery.  Ruestman-Harris Funeral
Home in El Paso is assisting the family with their
arrangements.


Memorial contributions may be made to the church or the El-Paso
Gridley School District Foundation.  Online condolences may be
sent to the family at
ruestmanharrisfuneralhome.com.

To send flowers to the family or plant a tree in memory of Duane Guth, please visit our floral store.

To send flowers to the family in memory of Duane Guth, please visit our flower store.