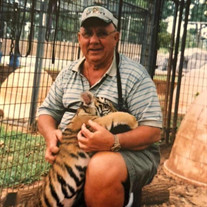 Edward E. Pruett, age 84, of Fresno, CA, formerly of Chillicothe passed away on Sunday, July 26, 2020 at California Veterans Home in Fresno California.
Ed was born on February 28, 1936 in Chillicothe, Illinois to Chester C. and V. Lucille (Forbes) Pruett. He married Leandra Justice on May 16, 1970 in Reno, NV. She preceded him in death in 1996. Also preceding him in death are his parents, brother Robert and brother-in-law, Rusty Medearis.
Surviving are his daughters, Deborah (Robert) Landucci of Fresno, CA; Shannon Wetters (Rick Gordon) of Rancho Cucamonga, CA; sons, Michael Fesperman (Irene) of Las Vegas Nevada, John Pruett of Seattle, Washington, six grandchildren; nine great-grandchildren; brothers, Russell (Sandra) Pruett, Mike (Sherry Zerbonia) Pruett, Jerry (Michelle) Pruett and sister, Linda (Russell) Pruett-Medearis. Also, many nieces and nephews.
Ed served in the U.S. Army for 21 years and retired as a Master Sergeant in 1978. Ed was proud of his service. He did two tours of combat duty in Vietnam where he earned the Bronze Star for meritorious service in a combat zone. Ed was a part of The Greatest Generation. He was a great American who served his Country with honor.
Ed lived life by one rule, "always keep moving forward." He will be missed by his family and friends.
A viewing will take place on Monday, August 10, 2020 at 10:00 A.M. with services to start at 11:00 at Lenz Memorial Home in Lacon. Burial will be held at the Chillicothe City Cemetery with full Military Honors directly after the service. Arrangements are under the care of Lenz Memorial Home in Lacon. In Lieu of flowers, donations may be made to Wounded Warrior Project or the Tiger Creek Sanctuary. 17552 Farm to Market Road 14, Tyler, Texas 75706. (903) 858-1008.


To send flowers to the family or plant a tree in memory of Edward E. Pruett, please visit our floral store.

To send flowers to the family in memory of Edward Pruett, please visit our flower store.