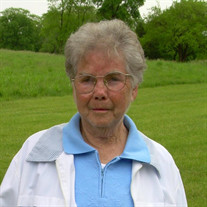 Eleanor "Eileen" Jason, 88, of Lacon, died on August 29, 2020 at Lacon Rehab and Nursing in Lacon. Born on December 21, 1931in Sparland to the late Charles and Ethel Reay Davis, she married Benjamin Jason on February 10, 1950 in Lacon. Ben died on November 18, 2006.
Eileen was a farmer's wife helping Ben on the farm and would go to town to clerk at the Ben Franklin in Henry and later at George's Red and White grocery store in Lacon
Eileen is survived by her daughters Barbara (Tom) Wiseman of Pekin, Karen Bezely of Henry, & Janet (Bruce) Nimmo of Washington; son Robert (Kathy) Jason of Metamora; eight grandchildren; 13 great grandchildren; and four great-great grandchildren. She was also preceded in death by her grandson Shawn Bezely, eight brothers and four sisters, she was the last surviving.
Funeral service will be held on Wednesday, September 2 at 10 AM at Lenz Memorial Home in Lacon with the visitation will be held on Tuesday from 5 to 7pm at Lenz Memorial. Burial will be in the Lacon Cemetery and memorials can be made to Lacon Sparland Ambulance or Easter Seals. Online condolences can be left at lenzmemorialhome.com


To send flowers to the family or plant a tree in memory of Eleanor "Eileen" Jason, please visit our floral store.

Please click here to view the video tribute
To send flowers to the family in memory of Eleanor Jason, please visit our flower store.