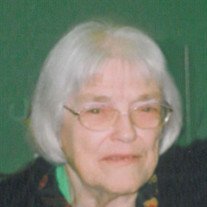 Bloomington - Eleanor Jean Balthrope, 89 of Bloomington, passed
away at 11:02 a.m. on Tuesday, March 11, 2014 at Advocate BroMenn
Medical Center in Normal.

Her funeral will be held at 1 p.m.
on Friday, March 14, 2014 at Kibler-Brady-Ruestman Memorial Home in
Bloomington with Rev. Stephanie Soon officiating.  Visitation
will be from 11:30 to 1 p.m. on Friday prior to the service at the
memorial home.

Interment will be at Prairie
Township Chapel Cemetery in Chrisman, IL.  In lieu of flowers,
memorials may be sent to West Olive Faith United Methodist
Church.

Eleanor was born on July 9, 1924 in
Scotland, IL, a daughter to Oscar E. And Goldie B. Dawson
Dixon.  She married Harold Balthrope in March of 1954.
He preceded her in death.

Preceding her in death were her
husband, Harold, her parents and two brothers.

Eleanor graduated from high school
in Scotland, IL.  She was a secretary at Evangelical United
Brethren Church, an office manager at Livingston's Dept. Store and
was employed at Miller's True Value.

She was a member of West Olive
Faith United Methodist Church in Bloomington where she also served
as secretary for many years as well as a member of the board of
directors.

Eleanor was a very joyous person
and loved being involved in her church.  She enjoyed sewing
throughout the years.

She loved spending time with her
grandchildren who called her "GG".  She will be dearly missed
by all.

To send flowers to the family or plant a tree in memory of Eleanor Jean Balthrope, please visit our floral store.

To send flowers to the family in memory of Eleanor Jean Balthrope, please visit our flower store.