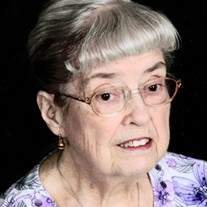 Funeral services will be at 11:00 a.m. on Monday, August 19,
2013 at Good Shepherd Lutheran Church in Bloomington with Rev.
William Jensen officiating. Visitation will be from 4-7 p.m. on
Sunday, August 18, 2013 at Kibler-Brady-Ruestman Memorial Home in
Bloomington.

Interment will be in Clarendon Hills Cemetery in Darien.
Memorials may be made to Good Shepherd Lutheran Church in
Bloomington, Illinois. Kibler-Brady-Ruestman Memorial Home in
Bloomington is assisting the family with arrangements.

She was a registered nurse in the Chicago Suburban Area for
twenty years working at hospitals in Elmhurst and Northlake and an
office in Elmhurst. She received her Nursing Degree from Triton
College in River Grove, IL in 1968. Ellen graduated from Morton
High School in Cicero, IL in 1942. A member of Good Shepherd
Lutheran Church in Bloomington, she was active in the LWML. She
enjoyed playing mahjong, knitting, quilting, gardening as well as
breeding, raising and showing Basset Hounds, Pugs and Japanese
Chins. She enjoyed being a licensed HAM radio operator and was a
member of several radio clubs in the state. She was a Corresponding
Secretary for the McLean County Genealogical Society. She was a
lifetime Member of the Advocate BroMenn Auxiliary. She enjoyed her
membership and friends in the NorBloom Red Hat Society.

To send flowers to the family or plant a tree in memory of Ellen Christine Hardy, please visit our floral store.

To send flowers to the family in memory of Ellen Christine Hardy, please visit our flower store.