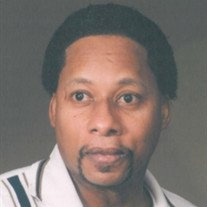 Mack was born on November 01, 1948
in Mc Lain, Mississippi to the union of Jack and Sarah Alice Walker
Anderson.

While Mack wore many hats as a son,
brother, father, uncle, husband, grandfather and friend, his
favorite hat said "Vietnam Veteran." He proudly volunteered to
serve two tours in Vietnam where he worked as a military police
officer. He continued volunteer work in the community - most
recently for Peace Meal. He enjoyed fishing, skating, darts,
backgammon and cards...and would let you know when you cheated
(Julie).

He had two biological children with
Janette Williams, and claimed a few extra along the way (Christy,
Timika, Rita, and Jeremia to name a few). He adored all of his
children, but took extra pride in the fact that he had twin
daughters. He was an honorable man who did what he said, said what
he meant, and didn't hesitate to say what he felt you should
know.

He married Anita Denise Moore
Anderson on October 19, 2012 in Bloomington, IL. Although married
only briefly, their love for each other was exceptional. She
preceded him in death on February 12, 2014 in Normal, IL.

Mack was a member of Word of Life
Ministries. He loved the Lord and did the best he could to emulate
His light. His unparalleled humor, off-handed remarks, and
larger-than-life personality will be truly missed.

He leaves to cherish in his memory
two daughters, Leslie Anderson of Belvidere; and Tracie Anderson of
Bloomington; five brothers, Bernell Anderson, with whom he shared a
special bond, Jack Anderson, James Anderson, Shelton Anderson, and
Johnnie Anderson; two grandchildren, Khalil Gillespie and Jonelle
Owens; and several nieces and nephews. Mack was preceded in death
by his wife, parents, and two brothers, Allen Anderson and George
Anderson.

A funeral service will be held at
11:00 a.m. on Saturday, March 01, 2014 at Kibler-Brady-Ruestman
Memorial Home in Bloomington, IL with Pastor Charlotte Dotts
officiating. Visitation will be from 10-11:00 a.m. before the
service at the funeral home on Saturday.

Cremation rites have been accorded.
Memorials may be made to Word of Life Ministries, the Wounded
Warrior Project, and Peace Meal.

To send flowers to the family or plant a tree in memory of Emanuel "Mack" Anderson, please visit our floral store.

To send flowers to the family in memory of Emanuel "Mack" Anderson, please visit our flower store.