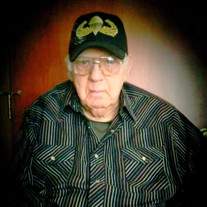 Ernest Koch Jr., 95, of Varna, Ill., died on March 17, 2021 at his residence. Born in Danville Ill. on November 12, 1925 to the late Ernest and Donna (Smith) Koch, he served this country in the Army as a Paratrooper during World War II.
Ernie married Lois Ward in June of 1949. After three children and 34 years of marriage Lois died in May of 1983.
He was a grocery with A&P and National Food Stores for over 25 years. Ernie later worked in maintenance and as a custodian at Prairie Grade School for the Naperville School District. Throughout his life he also farmed in both Will and Marshall Counties.
He is survived by his: daughter Donna Dickerson of Toluca; son Melvin Koch of Varna; brother Robert Koch of Joliet; grandchildren Jenny (Cory Hannah) Koch of Varna, Christine (Loren) Hunt of Lacon, Jesse (Jimmy) Parrot of Lacon, Jacob Koch of Varna, Douglas Dickerson of Michigan, Rebecca Harris of Crest Hill, Joy Dickerson of Toluca; and eight great grandchildren. He was also preceeded in death by his children Glenn, Steven, and Janine Koch and granddaughter Tracy Swanson.
A visitation will be held on Sunday, March 21 from 2 to 4 PM at Lenz Memorial Home in Lacon. Cremation rites will be accorded and a private family burial will take place in St. John Cemetery in Joliet at a later date. Memorials can be made to the donor's choice and online condolences can be left at lenzmemorialhome.com


To send flowers to the family or plant a tree in memory of Ernest Koch, please visit our floral store.

To send flowers to the family in memory of Ernest Koch, please visit our flower store.