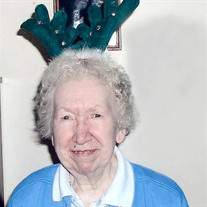 Frances worked as a phone operator in Lacon and later a dietary aide at Bueller Home and Methodist Hospital.

Services will be held at Lenz Memorial Home in Lacon on November 20 at 2:00 pm with a visitation one hour prior to the service. Father Tom Mizeur will officiate. Burial will be in the Immaculate Conception Cemetery in Lacon. Memorials can be made to a charity of the donor's choice in her name. Online condolences can be left at lenzmemorialhome.com.


To send flowers to the family or plant a tree in memory of Frances Gray, please visit our floral store.

To send flowers to the family in memory of Frances Gray, please visit our flower store.