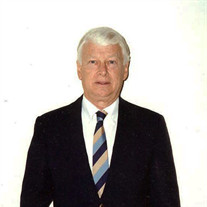 Frank Miles "FM" Garrett of Lacon passed away at OSF St. Francis Medical Center in Peoria at 6:10 am on July 12, 2014. The son of the late Stanley M. and Velda Jury Garrett, he was born on February 26, 1932 in Peoria, IL.
He attended Bradley University and was a member of Sigma Chi Fraternity. He graduated from Northwestern Dental School in 1957. FM was in the Air Force and stationed in Rabat, Morocco as a dentist. He married Lucille Capponi on July 14, 1983. She survives along with his two children, Jonathan (Kris) Garrett of Wilmette and Melinda (Glen) Martin of Steamboat Springs, CO. Also surviving are four grandchildren Justin and Jordan Garrett, Skyler and Brandon Martin and his sister Sandy Garrett Ullman of Peoria. He was preceded in death by his parents and brother in law Richard Ullman.
He was a dentist with his father Stanley in Lacon, IL for 40 years, a member of the Illinois Dental Society, Lacon Country Club and The Lacon United Church of Christ. FM was an avid reader and Civil War & History buff. He also enjoyed skiing, golf, tennis, flying, and all sports on TV. He was a loving husband, father, grandfather and a kind person.
Cremation rites have been accorded and a private family service will be held on Friday, July 25. A celebration of life fellowship will be held from 1- 3pm at The Lacon Country Club that day. Memorials can be made to The Lacon United Church of Christ, Lacon Sparland Ambulance or Lacon Library. Online condolences can be left at lenzmemorialhome.com

To send flowers to the family or plant a tree in memory of Frank "FM" Garrett, please visit our floral store.

To send flowers to the family in memory of Frank Garrett, please visit our flower store.