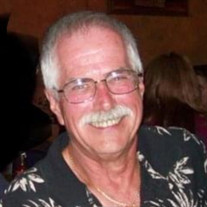 Frank V. "Vince" Kasky, 71, of Lacon Ill. died on March 8, 2021 at UnityPoint Proctor in Peoria. Born to the late Harvey J. and Zeta (Leddy) Kasky he married Carolyn Thome on April 25, 1986 in Lacon. Carolyn died on February 19, 2021.
Vince served his country in the Army during Vietnam. He came home and worked at Caterpillar for over 30 years, servicing and repairing the machines that others used to create Caterpillar tractors. After retiring he worked for Prather Amusement repairing video games and gambling machines. Vince was a member of Lacon American Legion #593, where for the last 10 years he was the Honor Guard Commander, presenting many American Flags to widows and families of area veterans.
Vince is survived by his daughter Terri (Gibbs) Stewart of Lacon; brother John "Bud" Kasky of Lacon; sisters Alice McCully of Lacon, Helen (Charles) Fender of Venice Fla., Carol (Don) Lindstrom of Varna; grandchildren Brittany (Curt) Evans of Marquette Heights, Seth Minton of Peoria, Brooke Chandler of Creve Coeur; Great grandchildren Lilly, Ben, Jack, and Leah; and many nieces and nephews.
Cremation rites have been accorded and graveside burial of Vince and Carolyn's cremains will on May 31, 2021 at 3pm in the Immaculate Conception Cemetery in Lacon. Memorials can be made to Easter Seals and Online condolences can be left at lenzmemorialhome.com

To send flowers to the family or plant a tree in memory of Frank V. "Vince" Kasky, please visit our floral store.

To send flowers to the family in memory of Frank Kasky, please visit our flower store.